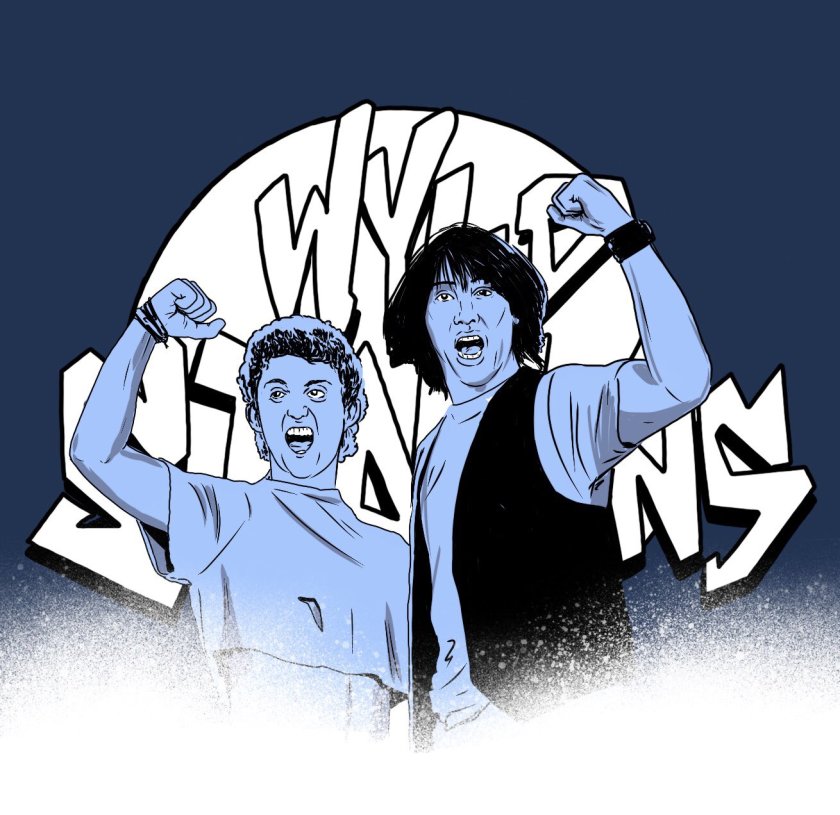 What is the secret of the infectious sweetness of Bill & Ted? How can you stop good ideas turning from sweet to sour? Bill, Ted (and one of their creators, Ed Solomon) might just be able to help us answer these questions.

It is a miracle that any film is ever made. Let alone a good one. The idea for a film is likely to be changed and compromised beyond all recognition* as it proceeds from concept to celluloid.** 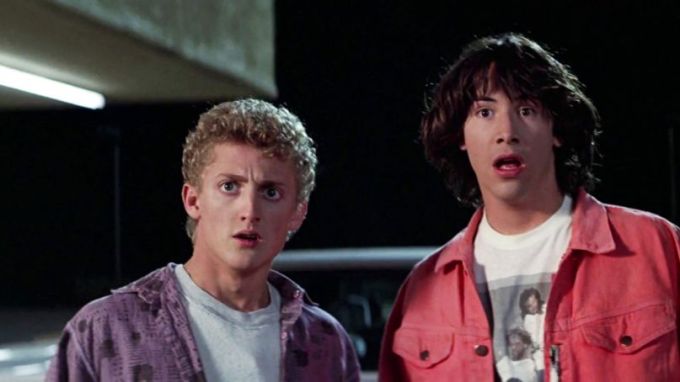 Bill & Ted’s Excellent Adventure is a miracle. It is not just a good film, but a perfect one. The dialogue is roughly 100 times better than it has any need to be – witty, eloquent and endlessly quotable. Alex Winter and Keanu Reeves bring this dialogue to life in the most delightful way. The film abounds with charm and innocence. The plot hinges on a logic that I can only describe as a joyously dumb kind of clever.

In his 2018 appearance on Brian Koppelman’s The Moment podcast, Ed Solomon – who co-wrote all three Bill and Ted movies with Chris Matheson – explains how Bill & Ted came to be. It was all there in the initial idea. Solomon and Matheson would perform sketches as these characters:

“One of the sketches we did was two guys who know nothing about history, studying history. Chris was Bill, I was Ted, just randomly. Chris and I just loved doing the characters. There was something fun and sweet. And there was something infectious.”

They eventually decided to turn these characters into a screenplay. Inspiration struck, and fast:

“We just blasted it in a week. We did an outline in three days and a handwritten script in four.”

Solomon describes how Bill &Ted’s Excellent Adventure struggled through the stages of being turned into a film. Just after the script was completed, his agent left him the following message:

“Do you hear this sound? That’s the sound of me falling on my knees, begging you not to show this to anyone.”

The sweetness came through 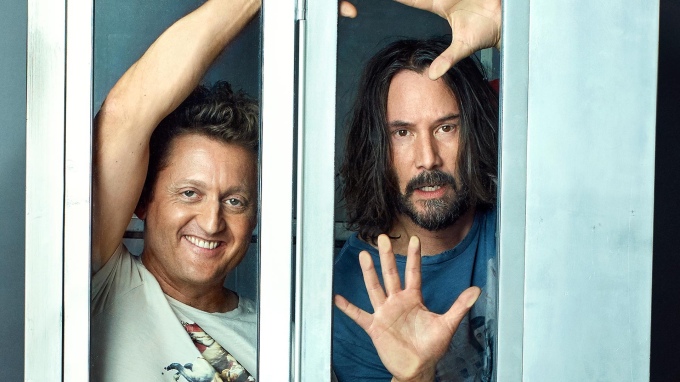 If you create anything and see it through to execution, its flaws will be painfully apparent to you once it’s out in the world. I know this all too well from sharing my blog posts and drawings online. Solomon had a much more public version of this experience when Bill & Ted’s Excellent Adventure was released. I love his description of how his relationship to the film has changed over time:

“When I look back at it, I’m deeply grateful, and I think ‘My god, we hit a much higher percentage of our intention than I ever would have expected.’ But at the time it didn’t feel like it. At the time, it felt like a series of compromises that we had to make to placate the studio and various different people involved in the production. In hindsight, would our version, if we’d fought, have been better? I don’t know. We [wanted] a more sort of raucous, unpolished film. But what we got was a really lovely [film]. The sweetness came through in a big way. The sweetness, the tone, the voice – that actually was the thing that was preserved, and was the most important thing of all.”

The last gasp of sincerity?

That infectious sweetness is key to the magic of all three Bill & Ted films. It is the most important thing of all. It is stunning to me that the team were somehow able once again to channel this same sweetness after a gap of nearly three decades for 2020’s lovely Bill &Ted Face The Music.

YouTuber Joe Scott is a gent after my own heart. My wife thinks he is pretty much an American version of me (or vice versa). In his Bill & Ted Face The Music review, Scott describes the magic of this film better than I could hope to. Here is what he has to say about the film’s message of hope, positivity and unity :

“I can’t speak for everybody else in the world, but I really needed to hear a message like that. At times in the film it was pretty on the nose. And maybe even ‘cheesy’ is a good word to use. But, you know what? We need some sincerity. We need some levity in the world right now.”

Scott believes that this sincerity was always central to Bill & Ted’s appeal. In their first two films, “Bill & Ted were sweet and they were genuine and they were sincere, and it was like the last gasp of sincerity”, he says. Scott seems just as surprised – and just as delighted – as me to see this lovely spirit shine through in the 2020s:

“I’m happy to say that they kept that feeling with this film. And it’s shocking to see sincerity and innocence and just happiness displayed anymore. I almost don’t trust this feeling of hope, optimism, what is this?”

If the original Bill & Ted films felt like the last gasp of sincerity three decades ago, how much more unlikely is it that their sincerity is so strong and so charming today?

Yet Bill & Ted Face The Music manages this impossible, miraculous feat, and makes it look effortless.

Capturing this spirit, this sweetness, is the most important thing of all.

Alive with its own kind of music

All ideas go through a similar journey from conception to execution. If an idea can be expressed as clearly as possible at an early stage, it has a better chance of surviving to the end product.

Writing the right words can help capture the idea, and give it a fighting chance. In the case of Bill & Ted’s Excellent Adventure, the dialogue penned by Solomon and Matheson was alive from the start with its own kind of music.

This brings me to some superb words from the late Gary Provost on creating music in the written word, which I came across a few years back, via a Twitter share from David D’Souza. 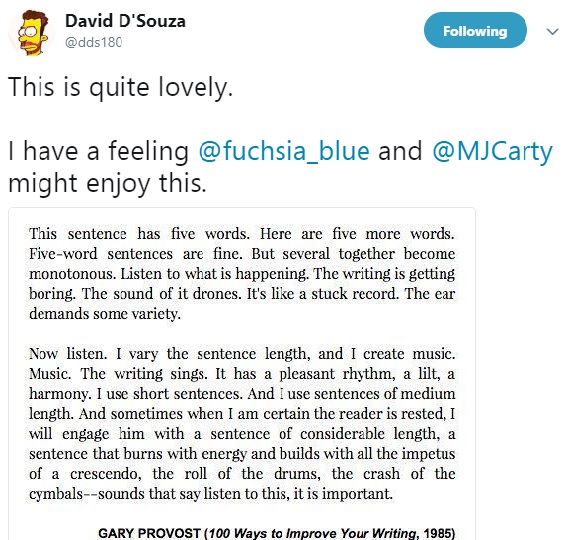 The website dedicated to Gary Provost and his work offers a slightly longer version of these words:

“This sentence has five words. Here are five more words. Five-word sentences are fine. But several together become monotonous. Listen to what is happening. The writing is getting boring. The sound of it drones. It’s like a stuck record. The ear demands some variety. Now listen. I vary the sentence length, and I create music. Music. The writing sings. It has a pleasant rhythm, a lilt, a harmony. I use short sentences. And I use sentences of medium length. And sometimes when I am certain the reader is rested, I will engage him with a sentence of considerable length, a sentence that burns with energy and builds with all the impetus of a crescendo, the roll of the drums, the crash of the cymbals–sounds that say listen to this, it is important.

“So write with a combination of short, medium, and long sentences. Create a sound that pleases the reader’s ear. Don’t just write words. Write music.”

Let the sweetness come through.

* David Hughes’s excellent books Tales From Development Hell and The Greatest Sci-Fi Movies Never Made provide an insight into just how unlikely the existence of any film really is.

** Gentle reader, please forgive me my dated turn of phrase. Clearly, the contingency that any film is produced on celluloid nowadays is a remote one. But the word “celluloid” has such a nice ring.

*** Spoiler alert: Please only read this footnote if you have either seen or have no intention of ever seeing the Amy Adams film Arrival. Still here? When I saw Arrival – a good little film, and a visually beautiful one – I found the big twist/reveal on which the entire plot hinges to be remarkably reminiscent of a scene in Bill & Ted’s Excellent Adventure. Specifically, the scene in which Bill and Ted make a mental note to their future selves to hop back in time and leave the keys to Ted’s dad’s car in the bushes, so that they can find them right now and make their getaway****. There is another great episode of Brian Koppelman’s podcast featuring Arrival screenwriter Eric Heisserer talking about how that film made it from idea to screen. But I do not believe that any potential inspiration from Bill and Ted cropped up in that particular chat. I do hope that there is an Arrival/Bill & Ted’s Excellent Adventure connection – always great to take inspiration from the very best!

**** Yes, a footnote to a footnote. Chris Matheson offers the following description of this absurd logic in the unambiguously-titled Making of Bill & Ted – The Most Triumphant Making of Documentary: