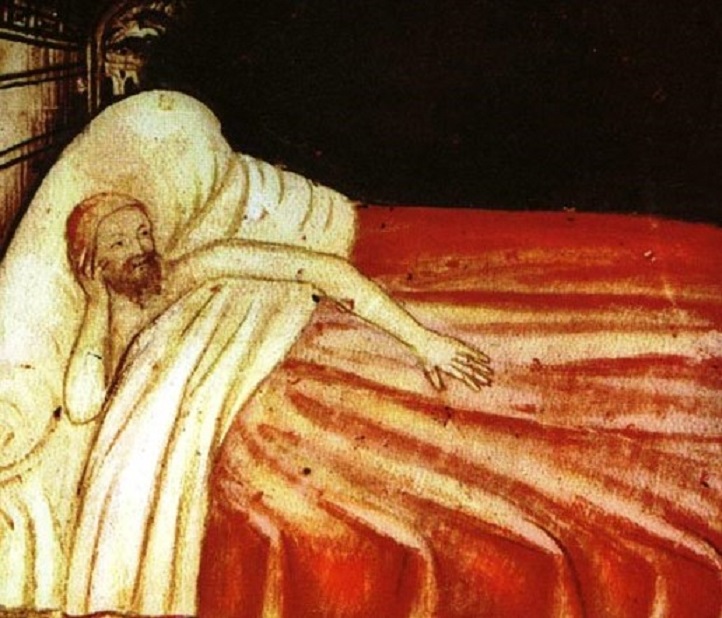 It all started with a rather noisy song. Sleepy-headed and somewhat down in spirits as I sat down with my morning espresso and logged in to Twitter, I thought I’d blast myself awake and attempt to lift my mood with the Beastie Boys’ immortal No Sleep Till Brooklyn. A tremendous and urgent piece of storytelling, a declaration of intent with tongue firmly in cheek. I tweeted a link to the song in the unlikely event that someone out there in the Twitterverse might be feeling similarly Beastie-inclined. It’s always worth tweeting out whatever is on your mind at any given moment. Most of the time, your tweeted words will disappear into the ether with zero consequence. But on a tiny number of occasions, they will land in the most wonderful of ways.

This was one such occasion.

To my great surprise, Mr Hardeep Singh Kohli responded. He shared a link to a version of No Sleep… that I somehow never previously knew existed, performed by none other than Jay-Z. If this is as unknown to you as it was to me prior to @MisterHSK‘s kind intervention, it’s well worth a minute or two of your time.

I was delighted to hear the Jersey City crowd cheer Jay-Z when he hit the line “they call me Adam Yauch, but I’m MCA” in memory of the dear departed Beastie Yauch. I tweeted Hardeep to say as much.

We got into a chat about Yauch. Hardeep talked about how his heart was slow to warm to the Beastie Boys (as was the case for so many people, myself included). If you were around back then, they might at first have seemed crude idiots yelling about beer over Led Zeppelin. Yet reinvention is real. As Hardeep says: “They grew up while we watched.”

I replied with the tale of my once happening to sit a few feet away from Yauch in Soho Square back in June 1994. As I wrote in my 2016 post #7songs: Beasties, beer spraying and Saṃsāra:

Adam Yauch’s path through life reminds me of Hermann Hesse’s Siddhartha (a beautiful and highly recommended book about how we all of us move through, inhabit and cast off multiple versions of ourselves on the path to enligthenment – not that we might ever achieve anything resembling enlightenment). Yauch went through an absolute personal transformation, from something resembling a gun-toting, drug-addled version of Faith-era George Michael to a quiet, thoughtful and clean-living Buddhist** (and occasional snowboarder), organising tribute gigs for Tibet and rapping about “the enlightened ones who’ve graduated Samsara.” Yauch also brought my one near brush with Beastie-ness. He and a girl were sitting right next to me on the grass in Soho Square for most of the afternoon prior to my first ever Beastie Boys show in June 1994 (which took place at the dearly departed London Astoria, which was right next to Soho Square). But so quiet and unassuming was Mr Yauch in person, that I didn’t actually realise it was him until the exact same guy in a grey t-shirt from Soho Square leapt onstage at the Astoria and kicked into Time For Livin’. RIP Yauch. A truly beautiful soul.

Yauch was arguably more than one person on just that one day in 1994. He was definitely many people over the course of his life. Adam Yauch is a perfect example of how one can reinvent oneself throughout life, and do so in the most positive of ways. This was perhaps his greatest gift to us.

I’d like to end this post with some lovely words that brought me joy when I needed it.

Returning to my chat with Hardeep the other week, Fiona Rivaz joined in the conversation with some appropriately complimentary words about Jay-Z’s take on No Sleep Till Brooklyn. I replied to Fiona that she and I were of a mind on this matter, and signed off with some good wishes: “May today be nothing but kind to you and yours.”

Hardeep chimed in, tweeting the following lovely words, which take, run with and amplify my own good wishes to Fiona: 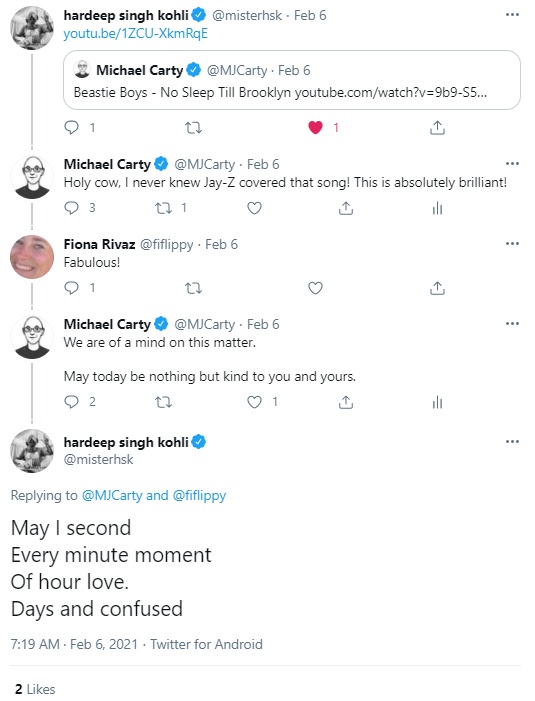 May I second
Every minute moment
Of hour love.
Days and confused