Where does creativity spring from? Brian Koppelman’s fascinating podcast with Geddy Lee of Rush offers some possible answers to this impossible question.*

Finding, building and exploring your own creative voice over a sustained period is not easy. Identifying and understanding the source of your creative voice can be even harder.

Creative self-expression can be such a personal matter of trust in gifts you do not understand. You almost don’t want to jinx the source of your creativity by examining it. The unexamined creative life might feel like the only one that it is possible to live.

I had something of a eureka moment regarding creativity and its wellspring, listening to the Brian Koppelman’s epic, in-depth conversation with Rush’s Geddy Lee. Both gents are now well-embarked on decades-long creative journeys. I was struck by how closely aligned are their insights on where creativity comes from and what sustains it. I was taken aback by how close they are to ideas I have long stumbled towards, but have never been able to put into words.

This was a crazily great thrill. And a really intense, deep convo. Geddy told me we talked about stuff he has never gotten into in an interview before. Was a great honor. Thanks @rushtheband! Please listen here: https://t.co/DaR2FsWxwN pic.twitter.com/sK9jNfL9tw

To go through them in order…

The first steps on a lifelong creative journey often involve failed imitation. Trying to emulate the work of others and not getting there. Lee arrived at his own style, his own creative voice, by trying to play bass like his idols (Jack Bruce of Cream, Chris Squire of Yes). He failed. But this failure is by no means a bad thing. Lee says:

“You can’t sound like any of them because you’re not any of them. Every player has their own sound just like we all have our own fingerprints.

Koppelman takes up this theme, citing Harold Bloom’s The Anxiety of Influence (a book I will definitely be seeking out):

“His theory is that writers try to imitate their favourite writers. But the great ones, in trying to imitate it, they fail to imitate it, and they end up creating an original piece of work that is somehow strange, different, no-one’s heard a sound like that before.”

Your failed imitation of someone else’s voice might be the first words you speak in your own.

The next stage in the development of your own creative voice is not to let this failure to imitate crush you. Creativity flourishes through confidence in what you produce. “The failure to sound like your heroes, combined with the more confidence you get in yourself is how you create your own playing personality,” says Lee. He continues:

“Artistic personality is this failure combined with confidence in yourself and your proficiency. You need a strong measure of that for your own personality to come out. Without that, you fall in, you turn in on yourself.”

This resonates strongly with me. I once wrote:

“When I write, I can come closest to saying what I want to say. When I draw, I feel like I have very little control over the results. The picture that I draw will have virtually no relation to what is in my mind. The spoken word is a different story again.”

When I draw, the flaws in my pictures are all I can see. The failure to imitate the image in my mind’s eye is so blatant that I’m often blinded to any other aspect of the picture. Over the last few years, I’ve forced myself just to put my pictures out there via Instagram, and not to draw attention to their flaws. Let the work speak for itself.

3: Trust in the subconscious 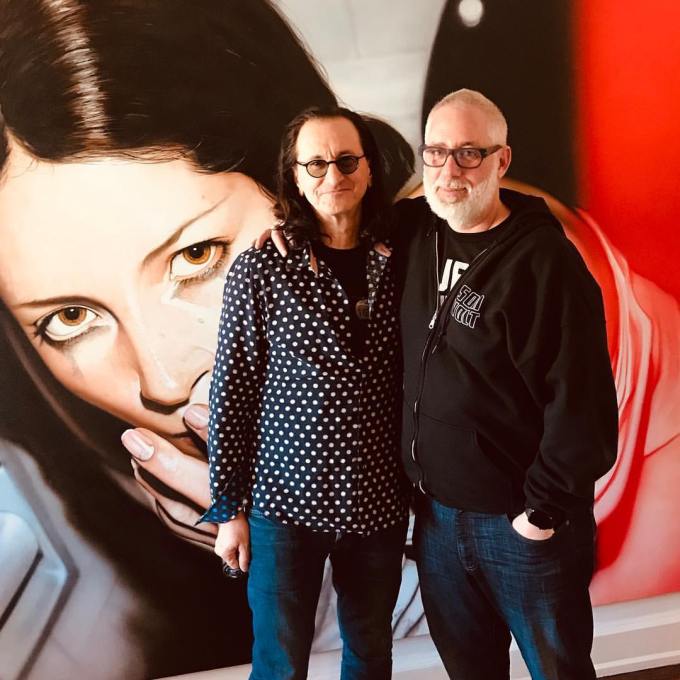 Where does creativity spring from? If you create over a sustained period, you may start to realise that the the subconscious does the heavy lifting. All you have to do is let it.

It’s important to have some idea of where you want your work to go. Then let your ideas percolate in your subconscious until it is time to execute them. This is the subject of the wonderful exchange between Geddy Lee and Brian Koppelman that opens their podcast chat:

GL: “You don’t know that until you fuck it up.”

BK: “That’s why we try to write ahead as much as we can, because you just don’t want to be on episode 9 and not have episode 11 written.”

GL: “You think in the back of your mind that this is going to be exhilarating. But then your sphincter is like this small.”

BK: “Totally. Because at a certain point you count on your subconscious to be doing the work. And often it does. But sometimes, if you’re not prepared ahead of time, you really put yourself in a bad spot.”

The virtue of sleeping on it

The part that the subconscious plays in creativity is the hardest to pin down. But it is also the most important part in the creative process. The subconscious does the heavy lifting. This is brilliantly expressed by John Cleese, in his various works on creativity.

Cleese is a big believer in sleeping on a problem. In a video on creativity that sadly now seems to have been removed from YouTube, he describes how he arrived at this belief. Stuck on a project one night, he decided to throw in the towel. When he returned to the work the next morning with fresh eyes, the solution seemed blindingly obvious:

“I couldn’t even remember what the problem had been the previous night, and I couldn’t understand why I hadn’t been able to see what the solution was. So I began to realise that this idea of sleeping on a problem, the idea of working on something, thinking about something, and then going to bed and waking up with the solution was absolutely extraordinary.”

Cleese became further convinced of the centrality of the subconscious when he lost a script on which he was working. He was forced to rewrite it rapidly. Unexpectedly, he came across the original once the new draft was complete. Comparing the two versions was a revelation:

“After I’d finished writing the original, the unconscious part of my mind must have continued working on it, even though I was not aware that that was what was happening. But the result was that when I came to write it out again, it was better.”

I should trust in my own subconscious more often. I woke up just a little blue on the morning that I first heard Koppelman and Lee’s conversation. I felt oddly sad that I was entirely lacking in blog inspiration. As I normally do when stuck for ideas, I took myself out for an early morning walk (this time accompanied by the Koppelman/Lee podcast).

Inspiration was waiting for me right there. The three foundations of creativity that I take from this podcast are three things I realise I have always known are there, but have never been able to put into words until today. Thank you, Mr Koppelman. Thank you, Mr Lee. Thank you, gentle reader.

I cannot wait to see where my subconscious might have decided we are headed next.

* This post was originally published on 5 January 2019. I am reposting it today as part of my occasional series on creativity. See also: Creativity: Take a jump into the unknown.