Gentle reader: Please allow me to share with you a visual record of this past week, taking in skeletons, castles, guinea pigs, forest fires, #Sketchulence and memories of the Bill Clinton era.

Limelyland was bathed in beautiful, entirely unseasonal sunshine for much of the past week. My wife and I headed to Lewes to enjoy the sunshine, and to pay a visit to Lewes Castle.

The lensflare over the castle walls was major.

From later that selfsame day, an MJCarty and an Ashdown Forest (sighted while out walking the dog-in-law).

Sorry to be the bearer of such rotten news, sir. But nature always rises swiftly from the ashes, stronger than before.

As I tweeted in response to former Ashdown Forest dweller David D’Souza, I am hopeful that nature will emerge from the ashes swiftly, and stronger than before. 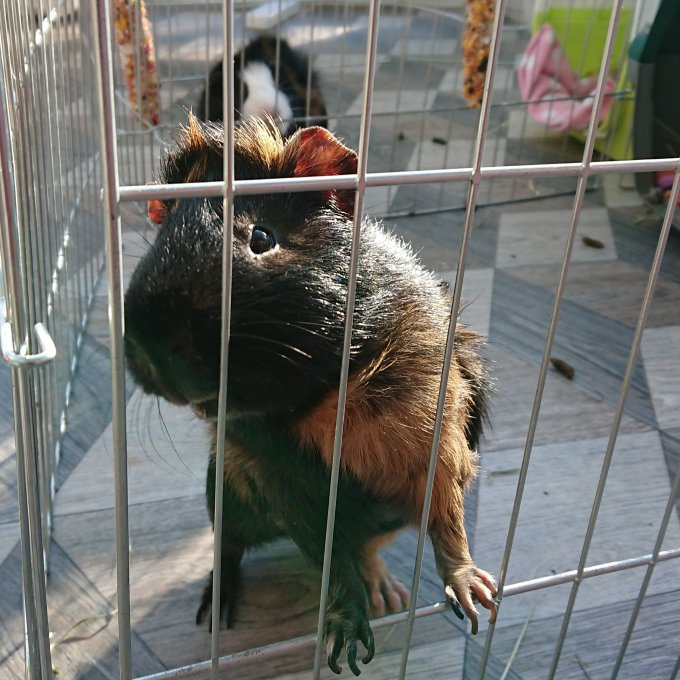 A veritable guinea pig pre-feeding frenzy. Praline seeks to suggest that it is high time his lettuce was served, while Sundae takes a one-second breather from his bar-rattling efforts.

Unseasonably springulent and rather lovely view from my train ride home. pic.twitter.com/AWEBpMXCRH

The balmy mid-February view from my train window on the way home from a hectic day at work. To any non-UK types, this is not characteristic of our land in winter. Exactly one year earlier, to the day, I was snowed in.

Inspired by a tweet from Vic Reeves*, I decided to give single-line drawing (ie the pen doesn’t lift from the paper for the duration of the doodling) a quick go on my train ride into work. The above is my first ever attempt. 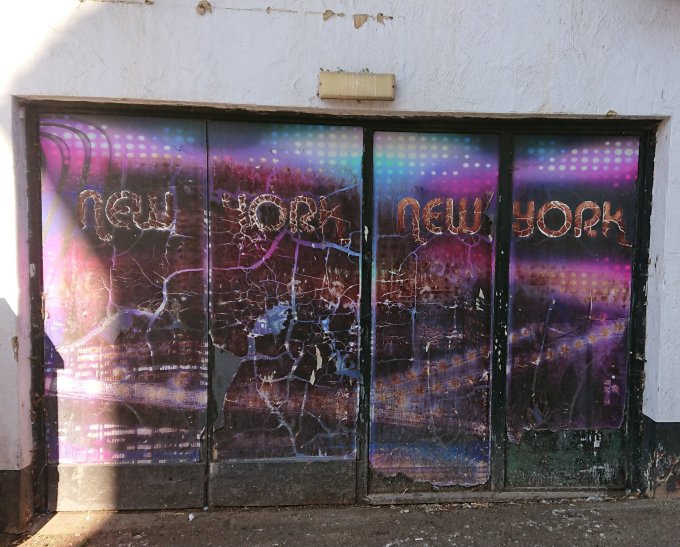 Deliciously decayed signs for a long-defunct nightclub near my place of employ.
My friend @FlipChartRick responded to this picture by sending me a link to a fascinating share – Nesta’s interactive map and analysis of the trend towards nightclub closures across London.**

"Everybody here belongs" https://t.co/jGRbnaufjE Wise words from @naval and others. pic.twitter.com/xcuTkhm6g4

I must confess to having something of minor freak-out (if a very quiet one, as I was sitting on my own) during my train commute home on Tuesday. Idly scrolling through Twitter, my eyes fair popped out of my head to see that (nearly 24 hours earlier) Tim Ferriss – author and podcaster extraordinaire – had tweeted a link to my latest blog post. This is by some distance the most humbling thing to happen to me in all my many years a-blogging. 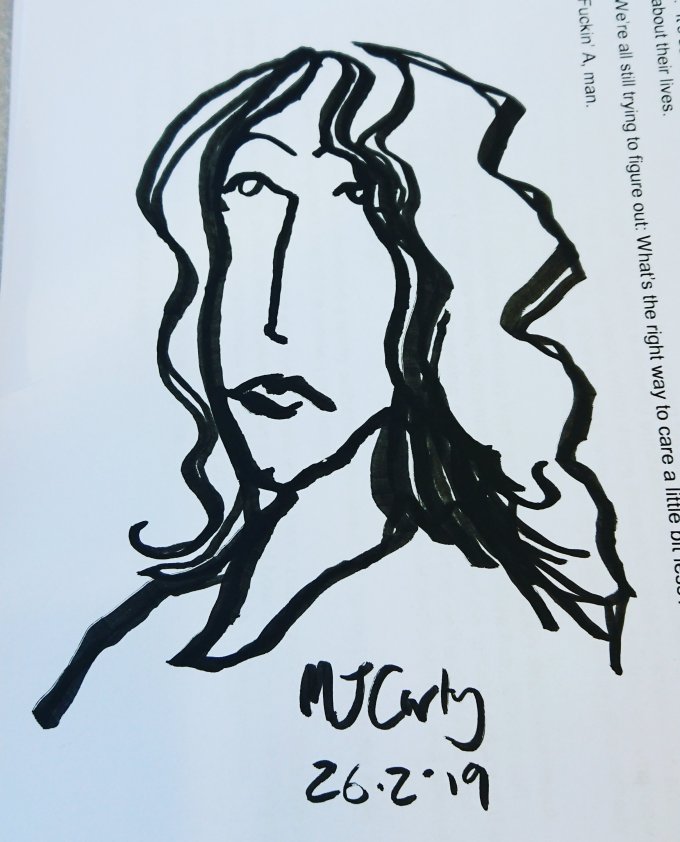 In an ultimately unsuccessful attempt to calm my mind down from its out-freakage, I had a second speedy go at the art of single-line drawing whilst on that train journey home. The above was the result. Eagle-eyed viewers might spot a printed quotation from the classic film Office Space to the right of this pic. These are the closing words from Office Space, and also from an article celebrating its 20th anniversary just the other week.***

The skeleton also rises. This phrase came to mind as I dragged my bones out of bed on Wednesday morning. On the train ride in, said Hemingway-derived wordage inspired the above third go at single-line doodlage, featuring a bony thumbs-aloft skeletal gent.

Espresso? EXTERMINATE! A suitable #CoffeeShot to kick off this #FridayJunior, the final day of February 2019.

Another example of single-line doodling, this time depicting Batman… or should that be Batmoan?

My friend Poonam Munshi coined the term Batmoan during her #Inktober run of doodles last year. You can see one excellent example above. 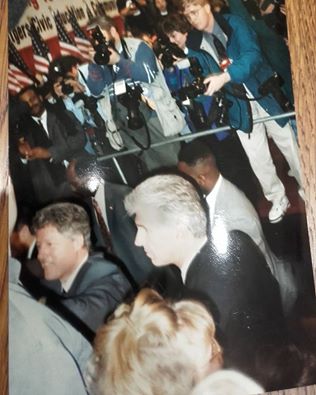 Friday brought with it this brand-new month of March. I realised that 1 March 2019 also marked the 26th anniversary of my getting to see Bill Clinton give a speech on campus while I was an exchange student at Rutgers University in New Brunswick, New Jersey. If memory serves, the build-up to Clinton’s speech was significantly more lively and interesting than the speech itself.

You can judge for yourself, as the video of the speech can be found on the C-Span website (or you can click on the link above – sadly it looks like I can’t embed the video). It is so strange to come across this video after all these years. I even recognise some of the Rutgers students standing onstage behind Clinton. For example, just above Clinton’s right shoulder stands one Michael Rooney, back then a major Stone Roses fan with whom I would regularly play chess. Are you still out there somewhere, Mr Rooney?

To round off this week, a little bit more #Sketchulence: 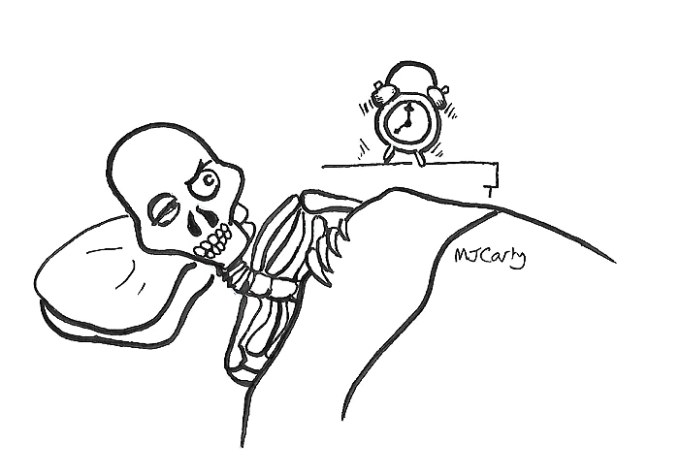 …and my second depiction of The Skeleton Also Rises!

Thank you for following this MJCarty week. Whatever might the next seven days bring? May today and this week be nothing but kind to you and yours.

* Here’s the tweet from Vic Reeves (aka Jim Moir) that inspired me to have a go at this single-line doodling thing.

** The BBC also put out an interesting documentary in 2017 on nightclub closures, entitled Who Killed The Night?

*** Mike Judge’s Office Space is a timeless masterpiece. If you have not seen it, please take immediate action to do so (then thank me later). Judge’s humour is present and correct today, in the monumental masterpiece that is Silicon Valley (again, if you have not seen it, etc). A week or two back The Ringer published a fantastic oral history of Office Space, speaking to pretty much everyone involved. I love this statement from Mike Judge on how some things might have come full circle since Office Space:

“I think a lot of people want cubicles back. People want some privacy. I think people keep dressing up work as something that’s not work. I think that’s almost more annoying than just the work itself.”

If you are an Office Space fan, please do not miss this article. I must thank Office Space also for giving me my first exposure to the music of the Geto Boys. Judge says that his extensive use of gangsta rap in the film was designed to serve “as a general backdrop to the boiling anger that’s underneath the surface of these places.” If you have seen Office Space, Geto Boys’ Still will be immediately familiar.