Do all roads lead to Weatherall? Almost a year on from the untimely loss of Andrew Weatherall, tiny reminders of the great man’s enthusiasm, taste and impeccable values abound.

Ripples of influence spread out far and wide from each of us, whether or not we ever realise it. How we act cannot help but affect or shape the lives of others. What we do might transform a life, provide an example of what to do (or what not to do), or forge a path for others to follow.

Most of the time, these ripples of influence are all but invisible. But just occasionally, they might be revealed through tiny reminders, fleeting moments of serendipity.

Here’s an example of one such moment. It all has to do with the spirit of a single human soul – the lovely and dear departed Andrew Weatherall.

We still miss you, Lord Sabre

I am going to go out on a limb here and suggest that 2020 may not have been anyone’s favourite year. The terrible events would not and did not stop coming. Early in the year came the shocking news of the death of musician, producer, DJ, raconteur and (it would seem) all-round good egg Andrew Weatherall from a pulmonary embolism. The news of Mr Weatherall’s passing affected me more than the loss of any public figure since John Peel. From my tribute Farewell, Lord Sabre (Andrew Weatherall RIP):

“Andrew Weatherall – as with Peel – was an influence so formative that you can’t imagine a world without them. You don’t even realise how deeply ingrained that influence is on how you view and interact with the world. As with Peel, I loved Andrew Weatherall for the incredible music he shared, for his warmth and wit, and for his fearless spirit.

“So many other people felt and will always feel the same way about Weatherall. A huge, emotional outpouring of touching tributes came via social media. Strikingly diverse in terms of who posted them and of the nature of their relationships to Mr Weatherall. Unified by affection and appreciation for all that he gave.”

Almost a year on from his untimely passing, what Weatherall gifted to us shines as bright as ever. He continues to inspire and unite so many people, myself included. Weatherall’s ripples of influence spread far and wide. 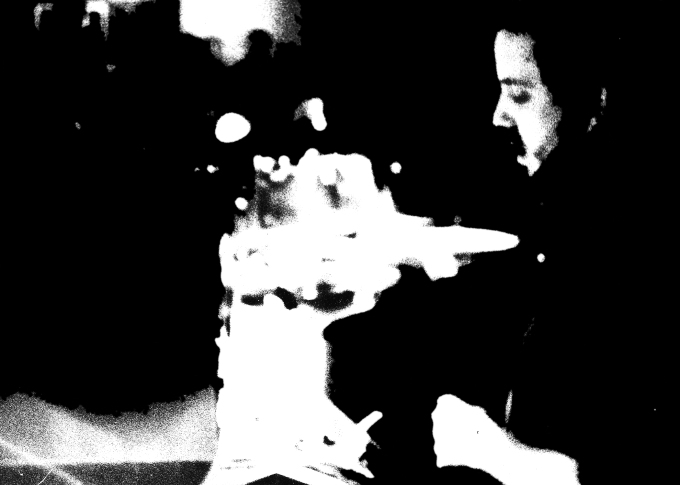 A tiny, quiet and personal moment of serendipity reminded me of the surprising ways that Weatherall has helped shape so many people’s lives. I read three wonderful books over Christmas: David Keenan’s This is Memorial Device; Kevin Barry’s Night Boat to Tangier; and Andrew Weatherall: A Jockey Slut Tribute (compiled by erstwhile editor of Jockey Slut magazine John Burgess).

On the surface, there is little to unite these three books. Each is beautifully written. Otherwise each is entirely different from the other two. But as I reached the end of the third book, I was amazed to realise that Mr Weatherall had some kind of link to how I came to read all three. 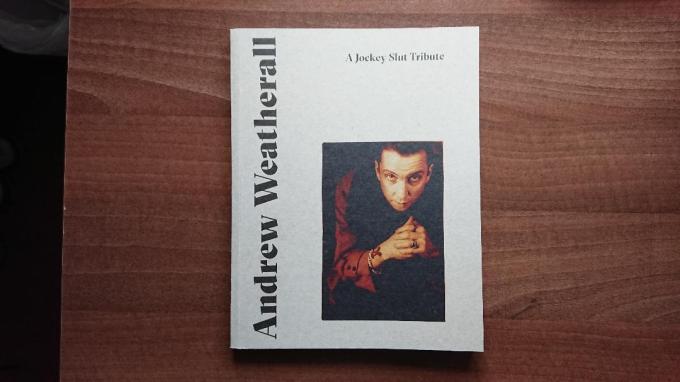 The influence of Lord Sabre could of course be nothing other than blatant in the third book I read – Andrew Weatherall: A Jockey Slut Tribute.*** This is a lovingly compiled selection of old Weatherall interviews alongside new written pieces and verbal testimonies on interactions with the great man. Weatherall’s boundless curiosity and good humour radiate from every page. His enthusiastic approach to life is perfectly conveyed in some words from a 2015 interview on how he came to recognise the central importance of knowing that you know nothing:

“When you’re young you think you know everything. That’s a good fuel. But up to a certain age. The second fuel – what do I know? – has to kick in.”

This second fuel very much kicked in for Mr Weatherall. Embracing the knowledge that he knew nothing gave him a renewed and infectious appetite for life, for experience, for music, for films and for books. When Weatherall found something he loved or that spoke to him, he felt a burning desire to share it with the world.

Do all roads lead to Weatherall?

“Literature was oxygen to him”, says Lee Brackstone formerly of Faber Social, now of White Rabbit Books. It was eye-opening for me to read of Weatherall’s love of reading. Yet it makes perfect sense that a gent with so eloquent a turn of phrase would be so well read. Reading these words reminded me that I’d decided to check out the second of my trio of Xmas books after hearing about it in David Holmes’s lovely Guardian tribute to Weatherall. This was Kevin Barry’s Night Boat to Tangier – almost a modern Waiting for Godot, as we eavesdrop on the extraordinarily vivid, warm yet threatening dialogue of two ageing Irish gangsters during their endless wait for a very particular vessel to come in. This book has special resonance for Holmes, as it was the last book that Weatherall recommended to him.

I started to wonder: Do all roads lead to Weatherall?

Back to the first of my three Christmas tomes. I gave David Keenan’s This is Memorial Device a go after reading the incredible tale of Lou Reed’s less-than-friendly treatment of Keenan and his mother when they dared to attend one of his concerts (seriously, if you’ve yet to read it, please do so right now – I am happy to wait). This is Memorial Device is a book like no other I’ve read. A fictional oral history of an imagined early-1980s Airdrie post-punk scene written with a hilarious fever dream intensity that perfectly captures a huge range of human voices and the absurd pretensions of young music obsessives.**** I was amazed to learn from Lee Brackstone’s words in the Weatherall tribute book that Mr W was involved in the gestation of This is Memorial Device through his work as artist in residence at Faber Social. I was still more amazed to learn that Keenan’s book so inspired Weatherall that he got a number of real-world bands to record an entire album of songs in the style of the bands described in This is Memorial Device. Brackstone says of this project:*****

“We never actually released the album, which sums up Andrew. It was about the process for him, not the end product and selling thousands of copies of it. We let it drift and went on to the next thing. Beautiful amateurism.”

Beautiful amateurism. These two words so perfectly sum up Andrew Weatherall’s spirit throughout his three-decade life (career just does not feel like the right word) in music.

Bernie Fabre – another voice in the Jockey Slut tribute – expands on this theme of beautiful amateurism with an apt quotation from Billy Childish. I tracked down a slightly longer version of these words from a 2012 SFGate interview with Mr Childish:

“Being an amateur means you’re doing it because that’s what you love, whereas the professional may well be doing it just to pay his mortgage. Amateur doesn’t mean that the results aren’t as good. The amateur should be able to make it better than the professional because it’s a much lighter touch. Generally speaking there are ulterior motives for the professional. For us, the amateurs, it’s nice and clean and clear. Amateur is based on the French word ‘to love,’ it’s something to do with that. Love, to love what you do. It’s not really insulting, but it’s good that it’s got an insulting twang to it because it’s always good to be on the wrong end of the seesaw.”

“Shoshin (初心) is a word from Zen Buddhism meaning ‘beginner’s mind.’ It refers to having an attitude of openness, eagerness, and lack of preconceptions when studying a subject, even when studying at an advanced level, just as a beginner would.”

Weatherall’s life in music was shaped by beginner’s mind. His music was and remains endlessly fresh because of his determination never to rest on his laurels and never to fear destroying his creations so as to start anew once again.

It seems almost too perfect, too Weatherall that Wiktionary offers the following definition for the Chinese symbol that it presents for Shoshin (初心):

Take reassurance in the glory of the moment 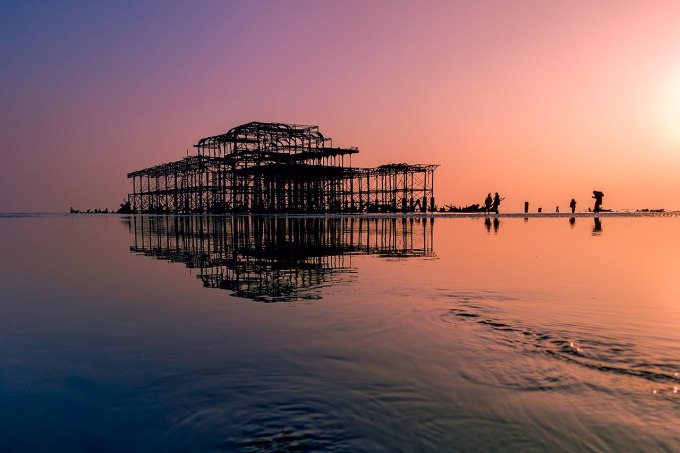 Beautiful amateurism. Beginner’s mind. Sharing the things I love. All things I aspire to always in my writing here on this blog.

For me, this blog is an invaluable hobby and outlet. I love to write. I love to see where words can take me. Writing lets me know what I think.

Regular writing is also a discipline – a highly enjoyable discipline, but a discipline all the same. I strive to keep it fresh and interesting for myself. I work to put out a new post every Saturday morning, without fail. The words keep flowing – for the moment, at least.

Ripples of influence spread out far and wide from each of us, whether or not we ever realise it. The profound and ever-deepening influence of Andrew Weatherall and his beautiful amateurism is the most perfect proof of this.

I want to close with some words on the sweetness of Andrew Weatherall the gent from David Holmes’s tribute:

“This sums up his friendship: I sent him a text last New Year’s Eve and he got back to me with two quotes. One from Anthony Wilson: ‘Rarely there when you want me, always there when you need me.’ And one from Jim Dickinson: ‘Take reassurance in the glory of the moment and the forever promise of tomorrow.’ Then he said: ‘Proud to count you as a friend. Happy new year to you and yours.'”

*** Andrew Weatherall: A Jockey Slut Tribute is a limited edition book produced for charity. The first edition has sold out, but Jockey Slut have tweeted an invitation to sign up for a second printing sometime later this year: “Due to huge demand we are happy to announce a limited reprint of ‘The Jockey Slut Tribute To Andrew Weatherall’. The book will only be available via pre-order (and sale once stock arrives) from independent record shops. Any remaining copies will be sold via the Jockey Slut store.” I highly recommend that you consider pre-ordering a copy of this excellent book.

**** I am thankful that a mention in This is Memorial Device inspired me to listen to the Velvet Underground’s Live 1969 rendition of What Goes On. A truly incredible piece of music. I was also delighted to have a short pre-Xmas Twitter exchange with David Keenan about this song. Appropriately enough for the themes of this post it revolved around how my coming so late to this song would mark me out as an “amateur” in the world of his book.

***** Brackstone mentions in the Jockey Slut Weatherall book that the Memorial Device-inspired album might see light of day in 2021, to accompany a literary tribute to Weatherall that he is currently working on for White Rabbit Books.