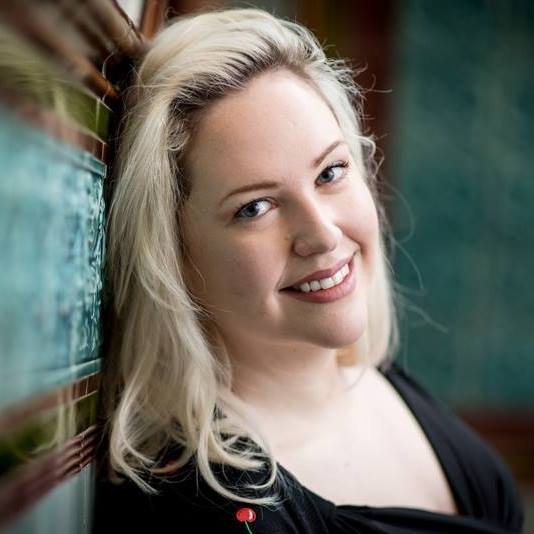 It is my honour to share this excellent guest post from Helen Reynolds (aka @HelReynolds on Twitter), marking the occasion of her tenth Twitterversary by looking at ten ways Twitter has changed her in ten years.

Last week, I celebrated my tenth Twitterversary. My friend Helen Reynolds has been in this Twitter game precisely one day longer than me. Helen joined Twitter one day before I did (on Friday 16 January 2009), making her very nearly my Twitter twin.

In celebration of Helen’s own 10th Twitterversary, it’s my pleasure and privilege to host her thoughts on how her 10 years on Twitter have changed her. It’s fascinating to me that Helen and I have independently arrived at some very similar perspectives on and approaches to how we use Twitter. I particularly like Helen’s point about finding a Twitter clan (“It’s better to be interesting to a small group of cool allies, with a side order of haters, than being bland to a massive group of indifferent followers who don’t know I exist.”). Finding your own voice and appreciating those who listen to you is the most powerful way to use social media.

Hopefully Helen will need no introduction. But if you need one, here it is. Helen is one of the warmest and funniest people that it has been my privilege to meet via Twitter. She has a wealth of experience in the PR/comms neck of the woods, and is a highly valued speaker, coach, commentator and trainer in this area (visit her Social For The People site to find out more). Helen also has a wonderful sideline in cartooning. Numerous examples of her work can be found on her Comms Cartoons site. I love the wit and unvarnished simplicity of Helen’s cartoons, which were collected in the book Work It Out With A Pencil. In her cartoons, Helen lets ideas flow directly into the world, via paper and pencil. 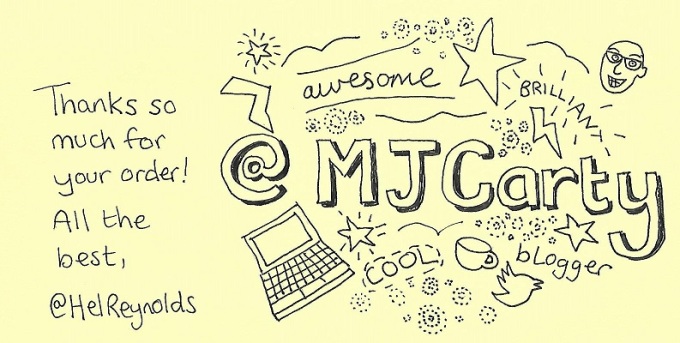 One of my proudest Twitter moments occurred when I received my copy of Helen’s book in the post. I discovered to my delight that Helen had thoughtfully included my own bespoke post-it note cartoon with my order. I still treasure it. Thank you, Helen, for the cartoon, for your tweets, for your friendship, and for permitting me to share your words here. Take it away, Twitter twin!

I love that me and Michael have hit the big 1-0 at the same time.

Michael is one of those people that demonstrates how Twitter is not just for Twits. I hear people go on about how Twitter is a cesspit of narcissists and trolls – but my life has been so drastically improved by Twitter.

This is a personal post for me. I won’t discuss how Twitter changed the world. There are journalists and bloggers who can research and tell that story better than I can. This is how in 10 years, Twitter changed me.

First, a shoutout to my favourite friend Esko Reinikainen. It was Esko who explained Twitter to me in a way that made me excited about the many possibilities it presented. If anyone had shown me, I’d have used it as a place to share opinions and do self-promotion. Esko showed me that it could be a place where you listen to people with wild and pioneering ideas, and where you go to learn and connect with people. So thank you, buddy.

If I had to sum up the rest of this post, it is this – Twitter has introduced me to amazing people.

1: I have a career that I love
When I joined Twitter I was a press officer at a council. Now I own my own business, training company comms and marketing teams in advanced social media techniques. I make a lovely living, and I do things exactly how I want to do them. The freedom is exciting and calming for me. I couldn’t have done this without the people I’ve met and learned from, the access to new clients it has opened up for me, and the confidence it has given me, to be sure that there are people out there who value my skills.

2: I found a clan and I found myself
I reckon there are a core of about 150 people on Twitter who I can count on to show some support for or interest in what I’m up to. This is valuable to me. It keeps alive the feeling that the world isn’t full of bastards and meanies. It’s not just backslapping, these people share insights and jokes and fun. They don’t mind if I occasionally swear, have weird ideas, or indulge my sense of humour (of the granddad variety). And actually, many would consider my tweet output to be unprofessional. But I have learned that it’s better to be interesting to a small group of cool allies (with a side-order of haters) than being bland to a massive group of indifferent followers who don’t know I exist. Twitter has fast-tracked my self discovery.

3: I can fake wellness
Sometimes, when I’m physically ill or feeling blue, I use Twitter to fake being OK. Before Twitter, whenever I felt the world was going on without me, I felt insignificant and forgotten, and like everyone thought I was a failure. This odd and unreasonable feeling about how others respond to me taking a break made it harder to get back into the world, to face people. Now, when I’m stuck at home because I’m having one of my unpredictable body flare-ups (thanks psoriatic arthritis!) – or if I just feel down – I use Twitter to carry on as normal. I can tweet from bed and nobody knows! I retweet interesting stories, reply to people who have tweeted me and realise – nobody needs to know about, or cares, when I’m not at my best. And they’re there when I’m better. This saves me, and stops things getting out of hand. Twitter can help fast-track my recovery. I’ll be faking it and then I realise – actually, I AM OK!

4: I love sharing the WTF moments
If you know me, you’ll have heard this before. When I went to see my idol, Elvis Costello in Manchester in 2012, he invited me on stage and I danced with him in a big cage! Well, I was with my mum, and she was so excited she didn’t get a photo. It’s not like I’m going to forget a once-in-a-lifetime experience like that or anything. But it was a thrill when someone on Twitter who I didn’t even know shared a photo he’d taken of that thrilling moment! If I get invited on telly, to talk about social media things, as I do occasionally, people on Twitter take photos of me on their tellies, and share it! I’ve got records of these fun and unusual moments and memories, and that’s lovely.

5: A zillion LOLs
There are funny people and observations to be found on Twitter. Sometimes, everything can turn around after a little snigger at a tweet. Twitter brightens my day. People join in with all sorts. Case in point: this time I was talking about how awful and ludicrous jargon can be: https://wakelet.com/wake/ac12e3f9-7334-4aad-98fb-04edd49cad53

Pleased my management speak movie slide seemed to go down well at #commshero yesterday (ta @johnpopham for the pic) pic.twitter.com/tfHbYXypaj

6: Actual friends, real-life ones
I don’t make friends easily. But Twitter has delivered to me Emma Rodgers, one of the most fun and beautiful people I could hope to call a friend. Without Twitter, I wouldn’t have met the lovely Joel Hughes, who asked me to speak at his workshop where I met Pippa Davies, a legend and pal who has the most wonderful attitude to life and is a creative inspiration. There’s a list I won’t go into here of about 15 people who I consider real-life buddies who I’d jump in front of lorries for.

7: I got to meet heros IRL, for coffee and invaluable advice
I followed this guy named Euan Semple, who wrote a book I liked: Organizations Don’t Tweet, People Do. Then When I left my job to set up a business, Euan offered to have a coffee with me. So did Mary McKenna, a genius who spends more time supporting other people’s careers than anyone I can think of. They both gave me INVALUABLE advice. There are about 20 or 30 more people I would consider heroic who I have met in real life, as a result of being connected on Twitter. Facebook is a place for people you know, Twitter is a place for people you want to know.

8: I banished perfectionism
I have fat thumbs and I tweet a lot. So it’s inevitable that I will misspell things, autocorrect the word “busy” to “busty” (that was embarrassing), and generally be as sloppy as any human being can be when not using a proofreader. It’s OK. As long as people get my gist, I no longer beat myself up for making mistakes.

9: Reawakened creativity
I got my creativity back! When I was a kid, I was always drawing, messing, tinkering, playing. Now, I see Twitter as a place where I can share that creativity, and encourage other people to do it too. I share poems, cartoons, writing all sorts and it feels great to try new things.

10: Oodles of freebies
Not really! I once got a foam model of a Ford and a bag of cardboard-flavoured crisps. My influence on Twitter is not extensive enough for brands to send me goodies. RIP klout, you showed promised but were ultimately a bit crap.

Thanks Twitter for enriching my life – I have found like-minded people that I love and that means the world to me. And big thanks Michael, for being a pal and letting me blether on here on his blog.