Here’s my #SaturdaySix for July 2018 – my monthly pick of six things that are inspiring, amusing or interesting me right now. I’d love to know what’s got you thinking and/or smiling this month. Please leave a comment and let me know!

ONE: THE C-3PO WHINGE 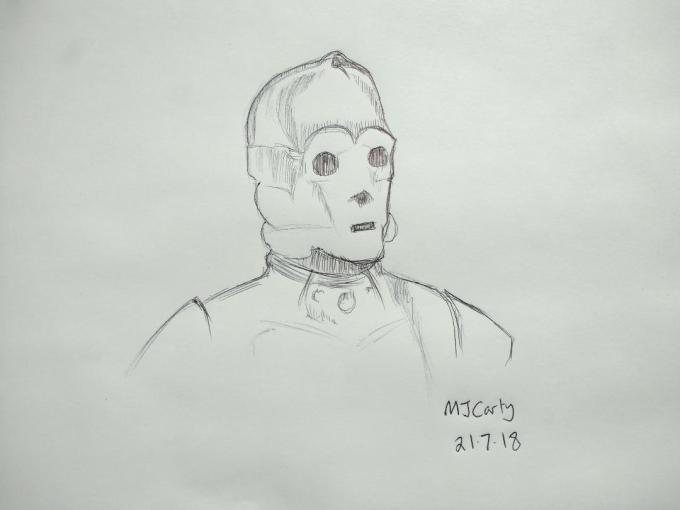 I got home from work the other week, somewhat fed up after yet another atrociously delayed commute in sweltering weather. Gentle reader: My thoughts were not at their most upbeat. But my mood changed on a dime when I realised my interior monologue was at that moment sounding one heck of a lot like C-3PO’s moment of über self-pity from the original Star Wars:

The C-3PO whinge is real. But you don’t have to go there.

Warwick Johnson Cadwell’s Twitter feed is a source of constant delight. His tweeted sketches are so pleasing. The moment of inspiration captured with wit, movement and life (two recent favourites: the brilliantly-titled “Cocky young vampire“;  and “Two fellas from a Spanish cooking programme last night“).

I particularly like the above picture of the Creature from the Black Lagoon, entitled Monday Morning Creature. I love the Creature’s expression of moody Monday disgruntlement. I also love that you can see what looks like the imprint of an earlier attempt to capture the Creature over to the right. Excellent work, WJC!*

On a Creature-themed note, allow me please also to share Mastodon’s delightful 2011 song The Creature Lives. This was quite a departure for them – a lighters-in-the-air stadium indie singalong of sympathy for a moody and disgruntled Creature who only wants to be loved.

My own particular iced coffee recipe is simple. Two shots of espresso. One whole tray of ice cubes. Combine in glass. Add “dash” of cream (or milk, or soy milk or almond milk or whatever your preference of dairy or non-dairy additive). Stir. Enjoy!

I have been commemorating these iced coffees in a series of #CoffeeShot pictures on Twitter and Instagram.

Here are two of which I’m particularly proud… 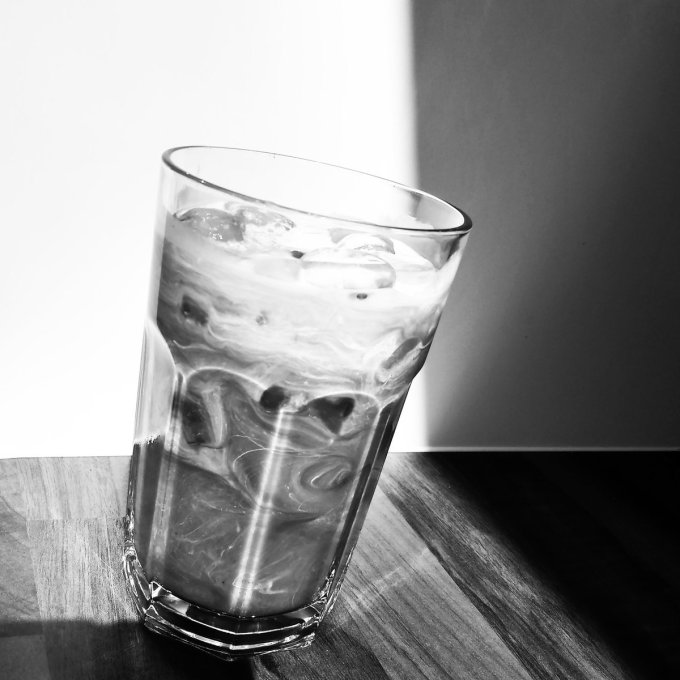 This one put me in mind of early 90s fashion photography (but with the usual lightly cheek-touching Cindy Crawford/Madonna/whoever being replaced by coffee). 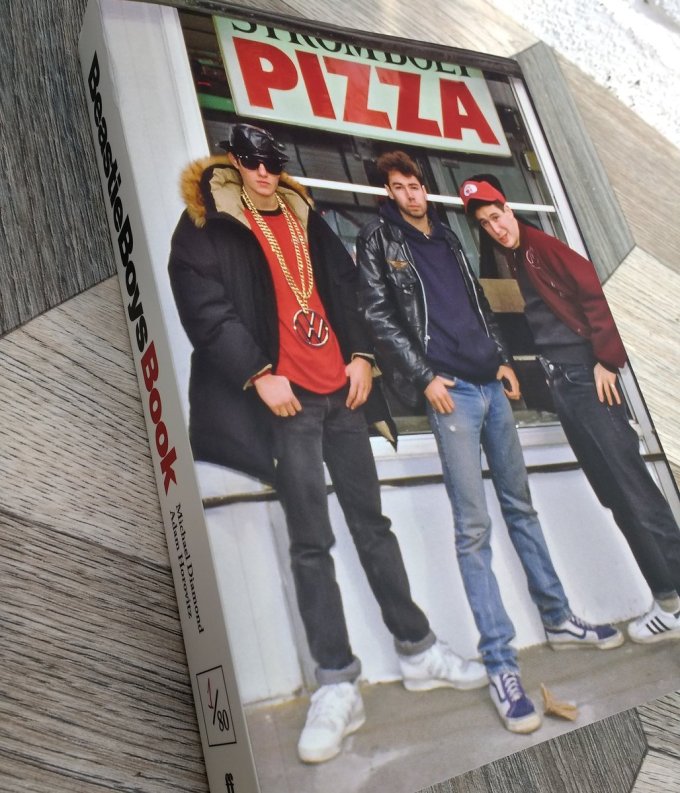 For the first time in my life, I won a competition this month! I am truly delighted with the prize. The good folk at Faber Social invited people to tweet their Beastie Boys memories. The prize? A proof copy of the cryptically titled Beastie Boys Book (numbered 1/80), months ahead of its November 2018 publication.

Calling all @beastieboys fans 📣 We have one limited edition proof copy of the @BeastieBoysBook up for grabs. For your chance to win tell us your favourite Beastie Boys memory. Remember to @FaberSocial & include #BeastieBoysBook in your answer. pic.twitter.com/xA0kbK5DHN

Here’s my tweeted Beastie memory of a (sort of) close encounter with the dear departed Beastie Boy Adam Yauch, aka MCA:

Failing to recognise a Buddha t-shirted MCA when I was sat right next to him for two or three hours in Soho Square on 22 June 1994 (when they played the London Astoria). I only twigged it was him when he leapt onstage for Sure Shot in the very same t-shirt! #BeastieBoysBook

“Yauch also brought my one near brush with Beastie-ness. He and a girl were sitting right next to me on the grass in Soho Square for most of the afternoon prior to my first ever Beastie Boys show in June 1994 (which took place at the dearly departed London Astoria, which was right next to Soho Square). But so quiet and unassuming was Mr Yauch in person, that I didn’t actually realise it was him until the exact same guy in a grey Buddha t-shirt from Soho Square leapt onstage at the Astoria and kicked into Sure Shot. RIP Yauch. A truly beautiful soul.”

I am sure I will write a lot more about this book closer to publication. But for now, I can assure you that – for one as immersed in the Beastie Boys’ world as me – this book is hugely enjoyable.

I love the following line from chef Roy Choi (who contributes an array of Beastie-inspired recipes in this book):

“As cooks and chefs, we love to take the most popular things off the menu because in many cases they weren’t meant to incite that certain reaction or to become popular in the first place.”

I love this concept. It arguably guided the Beastie Boys to their greatest achievements. It’s something I’ve done a fair few times. If something feels all-too-easy, why bother doing it again (or, worse, forever)?

Don’t be afraid to take the most popular thing off the menu.

FIVE: THE MEANING OF TRUMP

“Don’t look to political commentators like me to explain what Trump means. Look to animal behaviourists. They will explain to you this aggressive behaviour.”

This is David Allen Green’s take on Trump’s suggestion that this whole Brexit thing would be so much easier if Theresa May just sued the EU.

David’s words come from this week’s episode of the Remainiacs podcast, entitled Hard Brexit, Here We Come? He provides an excellent, evidence-based analysis of the current probability of a “no deal” Brexit (depressingly high, it seems; but not necessarily an entirely foregone conclusion). His words are witty, warm and wise.*** Whatever your views on Brexit and Trump, I would strongly recommend your spending an hour or so listening to David Allen Green here. And why not follow him on Twitter, into the bargain?

Mo’ sharks, mo’ problems? We close with a return to the #Sharkulent theme of last month’s #SaturdaySix post. Roving shark reporter David D’Souza spotted this distinctly Jaws-ful slide whilst out and about this month. His conclusion?

Meanwhile, sobering press reports suggest that climate change means things are going to be getting a lot more #Sharkulent in the seas around the UK, over the coming years. This diagram screengrabbed from a Times article indicates just who might be coming to dinner…

* My thanks to Warwick Johnson Cadwell for his kind tweeted permission to use his artwork here.

** The Beastie Boys Book does not officially “drop” until Thursday 1 November 2018. But it can be preordered here (and is well worth purchasing). The words “MMMMM….DROP!” were originally screeched out by Adam ‘The King Ad Rock’ Horovitz in the Beastie Boys’ song The New Style…

… and were subsequently self-quoted in their 1998 song Intergalactic.

*** As David Allen Green himself points out:

“One of the great advantages I have is because I try to explain technical stuff, it always sounds so much better with a Brummie accent. Everything does.”