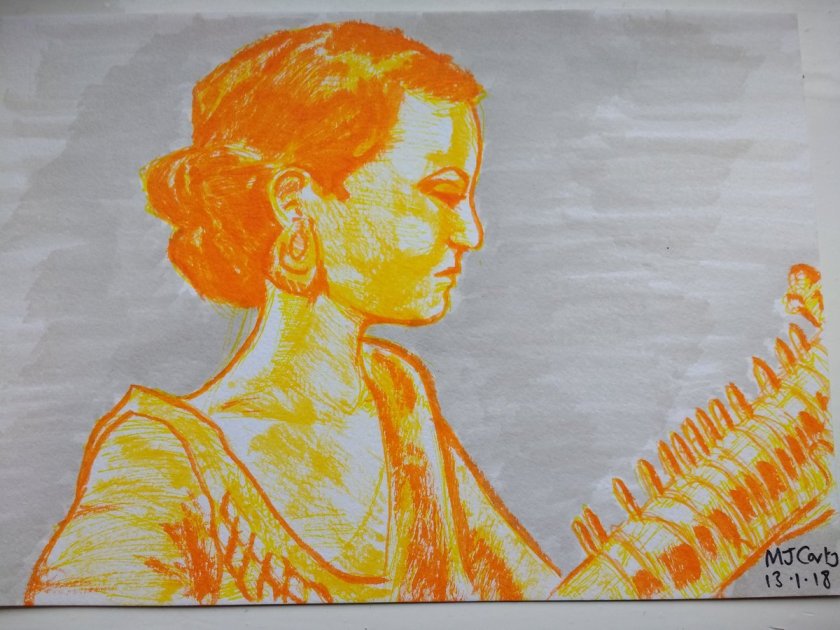 Welcome to something of a #SaturdaySix summer special. This is my monthly round-up of six things that have grabbed my attention over the past month. But hey, enough of my yakking… What’s inspiring you right now? I’d love to know!

ONE: ENCHANTMENT OF INDIAN ORIGIN

My friend Poonam Munshi is an incredible artist. Her work is expressive, intricate and always makes me smile. I think she surpassed herself this month with her portrait of Shreya Ghoshal. (my thanks to Poonam for her kind permission to include this picture here). I have to confess that Ms Ghoshal’s was a new name to me. She is styled as a “playback singer” for Indian films. I have to confess that I had to google this term. It would seem to describe singers who record songs for Bollywood stars to mime to onscreen. But these singers can also become huge stars in their own right.

It frankly made my entire month that Shreya Ghoshal herself publicly praised Poonam’s beautiful artwork.

I asked Poonam to recommend a good first song of Ms Ghoshal’s for me to try. Her recommendation was perfect: Mohe Rang Do Laal, from a film entitled Baajirao Mastani. I have listened to it countless times this month. I hope you will enjoy it as much as I do. Enchanting stuff.

Further wonderful music of Indian origin. This week I absolutely loved the latest episode of the BBC’s What Do Artists Do All Day? It provides a fascinating insight into how Anoushka Shankar works. UK folks can enjoy this televisual treat via iPlayer.

For folks in the rest of the world who may not be able to access the iPlayer video, here is a great video of Anoushka Shankar and friends live in concert in Berlin. I have listened to the music on this video countless times while writing and drawing (indeed, a still from this video inspired the sketch of Ms Shankar that you can see at the top of this post).

And now for something completely different, via the lovely Sir Ian McKellen. How I wish I had been present at this extraordinary and unique evening with Sir Ian.

Audiences expecting to enjoy his performance in King Lear at London’s Duke of York theatre on the swelteringly hot London night of Saturday 4 August 2018 were instead treated to something very unexpected and very special. But this magical evening was the result unpleasant of circumstances, as the great man himself explained.

I hadn’t long been up before I set off for yesterday’s matinee of King Lear. At the underground station I galloped up 45 steps to catch the train above. Once on it, I skipped along the carriage and my left leg gave way. A strained calf muscle was diagnosed … pic.twitter.com/5fH3ASa65o

The audience received a full refund. But while this was being sorted out, Sir Ian kept the audience company with 90 minutes of reminiscences. A tiny wee snippet can be seen here.

Went to see Sir Ian McKellen as King Lear, he injured his leg on the way there so the show was cancelled but he sat and talked to us for 90 minutes. Absolutely incredible. He answered… https://t.co/28R0URrE27

Someone in the audience asked Sir Ian McKellen his tips for auditions. He said "having been the one people audition to, just relax. Because they'll know if you're what they had in mind before you've even spoken a line, and if not, it's not incompetence or inadequacy on your part"

My thanks to Holly for her kind tweeted permission to include her photograph of Sir Ian McKellen from that most enviable evening. Thank you, Holly.

Meltdown. The recent UK heatwave made it hard to keep a clear and level head, evidenced by a particularly silly example of what UK news outlets dub the silly season (hard Brexit lunacy abounds). My friend Sean Jones has an antidote. Sean generously tweeted a daily run of short videos from his holiday in Scotland. His express intention was to help folks refocus and find some inner peace from the fierce heat, and the apparent meltdown in common sense and common decency affecting so many corners of this world. I particularly like this one from Saturday 4 August, described by Sean as “a mental ice lolly.” You might need to turn the volume up to 11 so as fully to appreciate the depth of the silence accompanying this beautiful scene. Thank you, Sean.

Today’s moment of Brexit-free peace doubles up as a chance to gaze upon a cool, still, non-humid scene. Treat it like a mental ice lolly. pic.twitter.com/3Q0U77l00H

“Maybe I’m not well. Maybe this isn’t normal after all.”

This is how Karen Teago describes the moment she realised that someone else’s symptoms of depression sounded all too familiar to her. Karen speaks openly and wonderfully about depression on the latest episode of Phil Wilcox’s Emotion at Work podcast. She discusses recognising the symptoms of depression and the actions that one can choose to take to treat it, touching on decisions around medication and disclosure. She also offers advice for those dealing with family members or loved ones who suffer from depression. Please consider giving Karen’s words a listen. Phil’s shownotes for this episode give links to resources for people who may be dealing with the issues discussed in the episode. Thank you, Phil. Thank you, Karen.

The pun, Samuel Johnson would have us believe, is the lowest form of wit. John Dennis went further, alleging in an 18th Century edition of The Gentleman’s Magazine that “a man who could make so vile a pun would not scruple to pick a pocket”.

But, gentle reader: Does the pun really harm anyone? It’s time to take the pun back. Here are three visual puns from the world of Twitter that have brought a smile to my face this month.

Nathan W Pyle claims to have “drawn the world’s worst pun”. I would beg to disagree – this is quite lovely.

I have drawn the world’s worst pun pic.twitter.com/aCtxFNmw1Y

You might need to be a limey gent of a certain vintage fully to appreciate this piece of Olympic-standard punsmanship from the great Nick Harvey:

Wife: Did you write that on there?
Me: Oh, err, yeah. It was for a twitter thing.
Wife: *stares into space* pic.twitter.com/7DIa2RXsKs

My friend Julie Joyce loves Ice-T as much as I do – so I was delighted to see this piece of Ice-related visual punnage!

Had an AMAZING fried avocado burrito today at Flaming Amy's Burrito Barn in Wilmington…complete with THE MAN @FINALLEVEL!! pic.twitter.com/c1CLVw1V38

Last show of the tour! You had better be loud London! #bepartofthelegacy #legacyofthebeasttour #ironmaiden #london pic.twitter.com/2naMSZuEpC

Scream for me, London! There is nothing in this life sorighteous, so joyously preposterous (this is in no way a criticism) as an Iron Maiden gig. This month I got to see Maiden for the fifth time in my life, and I would venture that – even with the whole band now over 60 – they are firing on even more cylinders than ever before. This show had the greatest possible setlist (give or take the lack of Phantom of the Opera), and the greatest possible staging. The critic from The Quietus is spot on in the following statement:

“The Legacy of the Beast [tour] – like a post-postmodernist Lichtenstein – brings the arcane world of the Boy’s Own comic to life.”

This was pure spectacle. A Spitfire dangled and lurched over the stage for opening number Aces High. Bruce Dickinson subtly explored the lyrical themes of Flight of Icarus with two wrist-mounted flamethrowers (can this even be legal?!?).

This was Iron Maiden in excelsis. My friend Mat Davies got to see them at two other shows on their UK tour this month, and his succinct review puts it perfectly:

I am indebted to my friend Nick Court for arranging the tickets for this show, and for inviting me along. Thank you, Nick (Nick is the one in the picture below who doesn’t have his eyes closed like an eejit!).

It's me and @MJCarty (with his eyes shut) ready for @IronMaiden pic.twitter.com/77fdjnjemy

Who has IT? You do! pic.twitter.com/Z5DuWeh1tY