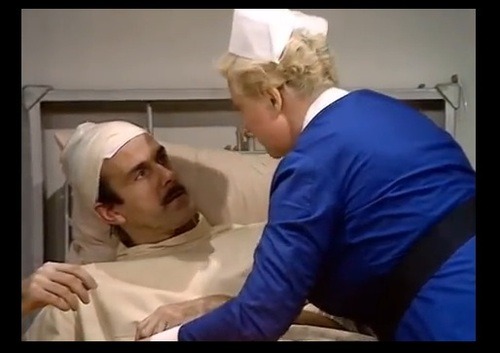 BASIL! When was Basil Fawlty created? The first episode of Fawlty Towers was broadcast 47 years ago this week. We can also pinpoint the day on which Basil was conceived, via Michael Palin’s The Python Years: Diaries 1968-1979.

How can we tell when genius strikes? Exactly 47 years ago this week (on Friday 19 September 1975, to be precise) the very first episode of Fawlty Towers was broadcast. And if anything can safely be said to define the word “genius,” it’s Fawlty Towers. In the case of the creation of Basil Fawlty, we have that rarest of luxuries. We can pinpoint when genius struck. We know the when, the where, the who, the how and the why.

It would seem that Basil Fawlty is believed to have been inspired by one Mr Donald Sinclair, then proprietor of the Gleneagles Hotel, Torquay, England. The Monty Python team spent the night of Monday 11 May 1970 at this very boutique. t was to be their base for a two-week filming stretch away from London. But it would appear that Mr Sinclair’s behaviour provoked most of the the Pythons to move on after just one night. Palin relates: Were the Python team haunted by the spirit of Basil Fawlty throughout their post-Python lives? Just the morning after publishing this post, I read the following lines in Michael Palin’s Halfway to Hollywood, Diaries 1980-1988 (penned on his first ever day setting foot in Australia, Tuesday 11 January 1983):

I’ve had some very interesting Twitter responses to this post, too (from when it was originally published to this blog, way back in 2014). The great Simon Heath shared the following via Twitter: “Always loved all things Python-related. Cleese is an alumnus of my alma mater.” The alma mater in question turns out to be Clifton College, Bristol. Mr Heath notes that Mr Cleese is “listed as an old boy of note,” but also cautions that “he has been pretty scathing about the place.” He also very kindly shared with me a link to a (frankly epic) list of illustrious alumni, which includes the following entry on Cleese:

In May 2020John Cleese tweeted a video clip of a 1980s Parkinson interview, in which he recounted the tale of the inspiration behind Basil Fawlty… and also informs us that he had made a recent return visit to The Gleneagles Hotel, only to find it had a new manager, “a disappointingly charming electrician”.

The real life inspiration for Basil Fawlty.
From a BBC interview with Parkinson. I talk about the cynical manager at The Gleneagles Hotel in Torquay that I met while staying with The Pythons. He became who I based the character off of and I changed very little. pic.twitter.com/cl60uwxfpH

Please do let me know your favourite moments of Fawlty Towers genius! And if you’ve ever stayed at the Gleneagles Hotel, Torquay, how was it?